Bune Raven is a wonderfully mercilessly forced meme even on this wikia and the only meme that true meme enthusiasts can classify as bad the worst meme in the history of spam. A common misconception is the idea that Bune Raven is a meme. It does not follow the official meme guidelines correctly, and therefore, is not actually a meme.

Bune Raven was started by a horrible thread simply stating "hey guys", and a picture of the Teen Titans as furries. One reply in the board stated "Bune Raven a cute", which was then replied with the right image. Afterwards, a user decided to spam it in all possible threads on the /s4s/ board, with the text "bune raven is new meme".

Of course, with all the local memesters not wanting some trash rabbit as the new meme, it was immediately attacked. The spam continued on for 3 days, being posted among fanart and very unamused replies.

Just as the spam was dyeing out, the poster of the meme was possibly banned with the text "USER WAS BUNED FOR THIS POST", but in reality swaglord just decided to join on forcing this meme, causing figs to bump all the already-made bune raven threads, continuing the spam of this horrible forced maymay.

The Bune Raven user's misguided attempts at fostering a meme were an eyesore, and the resultant copycat-as-troll posting of the image may yet kill /s4s/. Many /s4s/ users have already declared the impossible has happened: they dislike a meme. This has birthed the school of thought that states that as Bune Raven is so easily disliked, Bune Raven is in fact not a meme. The debate rages on.

The ceaseless posting of bune raven led to many copycat spammers, each also responding to every possible thread with their own new forced memes, each one more pointless and spammy than the last.

Bune Raven was finally slaughtered at the hands of ceiling/floor fan.[1]

this is nice bune 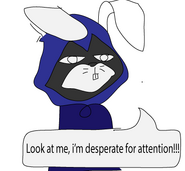 The usual reply to this garbage meme 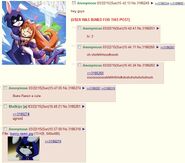 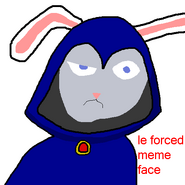 Cite error: <ref> tags exist, but no <references/> tag was found
Retrieved from "https://s4s.fandom.com/wiki/Bune_Raven?oldid=13629"
Community content is available under CC-BY-SA unless otherwise noted.