Smug Wojak is a meme that started on both /r9k/ and /s4s/ in early August 2014. It is about a drawing of a character which somewhat resembles Wojak (the feelguy). It is based on both Wojak and Smug Pepe (a pompous-looking version of Pepe (the sadfrog)). Smug Wojak can be used to convey positive feelings or as a related picture (e.g. Smug Wojak who holds chopsticks can be used as an OP post image in a sushi thread).

Like Smug Pepe, Smug Wojak usually has his eyes partially open, a smile and his left hand in front of his chin. Smug Wojak is sometimes depicted holding, using or wearing various items, such as a bottle of Wojak (a Polish beer brand), a Desert Eagle, a fork with spaghetti, headphones, etc. These are usually taken from photographs of real-world objects (or pictures that closely resemble them). Sometimes Smug Wojak is seen wearing clothes, such as a black suit. These are also from realistic-looking images. Smug Wojak is left-handed.

Smug Wojak looks fatter than original. However, this can be interpreted metaphorically, as inflated ego or grown confidence. In addition, Smug Wojak's facial expression is smug, whereas the original one looks depressed or void of all feelings. An illustrated comparison of facial features is below.

The figure below shows Wojak's transformation into Smug Wojak.

Smug Wojak has gone through a few iterations before his current form.

In this iteration, Smug Wojak has his index finger just below his nostril. His hand looks very crude.

The index finger is moved below his mouth and is almost straight. The hand still looks rather crude.

The thumb and index finger form a circle. The hand still looks a bit crude.

The fingers have been moved and thickened since the previous iteration. The hand is very similar to that of Smug Pepe.

On the 17th of August, 2014, someone started a thread on /int/ with an image of Smug Wojak with a comment ">tfw no gf". The thread was deleted almost three hours later. An archived version exists here: https://archive.moe/int/thread/28804058/.

On the 20th of August, 2014, there was a thread named "what does /tv/ look like" on /tv/. Someone mentioned Wojak, and somebody else asked who he is. That question was answered with ">Not knowing about smug Wojak". The thread is archived here: http://archive.moe/tv/thread/47838908/.

The Smug Wojak presented above is by no means the only one. There are other Wojaks with a smug expression. While they may have been around longer, they were not referred to as "Smug Wojak" before this one, or at least there are no records of such references. 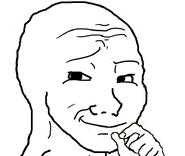 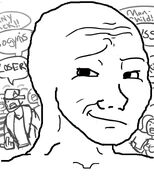 There are some sub-memes based on Smug Wojak.

Smug Wojak and the Blackboard[]

This meme consists of an image of Smug Wojak holding a chalk and a blackboard with some text.

You say this meme is FORCED? (first occurrence of this meme)

Smug Wojak and the Computer Monitor[]

In this meme, Smug Wojak poses in front of a table which has a computer monitor that directly faces the viewer.

Cross-over with Other Memes[]

Smug Wojak is mostly a crossover with Wojak and Smug Pepe. However, he has been connected to other memes as well. These include

Smug Wojak, as seen with Doge 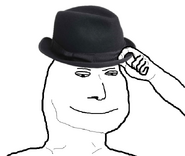 I have the keys to power!

My face when I beat spaghetti. 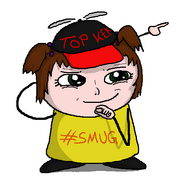 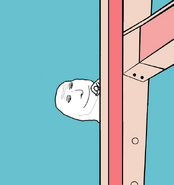 If I see that fucking Smug Wojak one more time...

The meme has got a few positive and a couple of negative comments on /s4s/, but it has been ignored by the majority of the board.

One user said they liked the meme. Another said Smug Wojak looked "coy".