Top Leek is a meme derived from Lel, Kek and Top Gun. It is a picture of a leek wearing a Top Gun hat (which is on top of the vegetable). It was originally posted on the 18th of August, 2014 and has appeared on multiple threads since.

Top Leek threads sometimes contain information and stories about leek, as well as jokes and puns where a word which is similar to leek either in written or spoken form is replaced by said word. For example, "Look at this!" becomes "Leek at this!" and "leak" becomes "leek". The meme has also been used to indicate laughter, similarly to lel and kek.

Especially when Top Leek was less than a few weeks old, healthiness and positive effects of leek were posted along with the meme, often by namefig Department of Health and Nutrition Information Bureaucracy Services.

During some picture and information leaks in 2014 and 2015, Top Leek was briefly more popular than usually, although no relation to these incidents has ever been intended. The first leak happened coincidentally with the introduction of the meme.

It is also common to see pictures of le Chinese mp3 grill posing with a spring onion in Top Leek threads.

Top Leek is a combination of Top, Lel and Kek.

The anatomy of Top Leek (and Pot Leek) consists of a leek top and a leek pot.

Cross-overs with Other Memes Edit

The first image from the left in the gallery below was originally posted on a "Top Leek" thread on the 20th of August, 2014. Someone replied to it with "just leek at the time", which in turn was replied with the second image from the left. 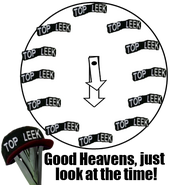 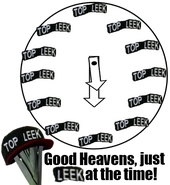 This image was posted in the first Top Leek thread.

The image with the Doubles Guy and leek was originally posted by Kekkats.

"Top Leek is top." is a sentence which frequently appears in Top Leek threads.

Kekkats posted this image in a Top Leek: Saturday Edition thread on the 23rd of August, 2014. The post also had this text: "If I see that leek one more fucking time".

This image appeared in the first Top Leek thread. It was introduced as "Top Leek's brother" by its poster.

Top Leek was included in Greatest Possible Tactical Achievement version 2.01 and has appeared in many other meme collages. In addition, a Top Leek background is seen in some kek suit images. It is also featured on the front page of dankmaymays.com. The "Leek at the time" image has also appeared in the template used on pages describing current events (as shown by the image in this section). Top Leek has become one of the "three perfect foods", the other two being Top Kek and Top Ramen. Eating these foods and checking dubs is the meaning of existence according to [s4s].

Retrieved from "https://s4s.fandom.com/wiki/Top_Leek?oldid=15202"
Community content is available under CC-BY-SA unless otherwise noted.